Figure in the Landscape (image)

In my village, I’m the fool.
Sad dogs know me — sad white school
of sleepy dogs that drift away
into the distance. They don’t bay.
They keep me happy from afar —
cloudish dogs is what they are
that run about the sky’s massif.
And we’re all drunk on grief.
Where we wander we don’t know.
Ancient shepherd, as I go,
bless my soul with your great gifts
of moon and these long wakeful shifts,
heavy, gashed time and again
like a bleeding heart. Amen.

‘A Fool’ is wittily self-effacing but also philosophically and spiritually profound, drawing on both the Ancient Greek tradition of cynicism (from kuōn, or “dog”) and the Christian tradition of fools for Christ’s sake. (Harriet Staff)

Bohuslav Reynek (1892-1971) was one of the most important Czech poets, writers, painters, graphic artists and translators of the 20th century. In 1904-1911 he studied at Grammar School in Jihlava (German Iglau), Bohemia. There he learned both French and German. After a short time studying at Prague University, he left Prague for Petrkov. In 1926 he married the French poet Suzanne Renaud, whose work he would later translate into Czech. In 1914, he started his long-time and close cooperation with Josef Florian in the town of Stará Říše translating, illustrating and publishing his own poetry. He and Suzanne had two sons. In 1949 his farmstead was confiscated by the new Communist state (he and his family were allowed to live on in Petrkov) and the publishers that had heretofore published his work were closed down. He died in 1971 on his farmstead.

Reynek’s poems are meditative and inspired by the Czech landscape, rural life and a deep Christian faith. What is noteworthy is the delicate way in which religious themes are refracted through images of his immediate surroundings; the poems invest everyday objects and scenes (such as the farm animals, their byres, the rhythms of the working week) with a spiritual luminescence, a bright edge, and this is done so delicately that at no point does it feel imposed. He employs, for the most part, traditional forms, with inventive rhymes.

After the Communist revolution of 1948 Reynek's books were prohibited and those of public libraries liquidated because of Reynek's Christian faith. He died poor with his works banned but became a hero to young Czech poets of the 1960s and 1970s, the most prominent of which were Ivan Martin Jirous, Zbyněk Hejda and Ivan Diviš. His work was published in exile and after 1989 a critical edition of his poems was completed and edited by Torst Publishing House, Prague. (Wikipedia) 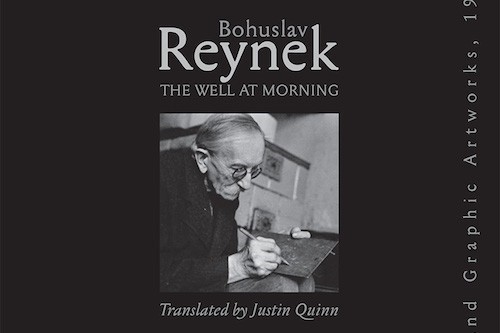 An excerpt from the review at Los Angeles Review of Books: “From the three essays at the end of the volume, we learn that Reynek was always a rural farmer but began his creative life contributing translations of contemporary German and French poetry to the Czech Stará Říše publishing house, based near his home in the Czech-Moravian Highlands. He began his career, as did so many of his Eastern and Central European contemporaries, as an epigone of the Symbolists, but he soon found his own voice — a voice that was spare and humble, at times proto-absurdist, and also capable of wielding powerful biblical imagery. It is a voice that, according to Quinn, “insists on broader continuities with the European poetic tradition, which glide easily past temporary glitches like communism. Like the poetry of Boris Pasternak’s imaginary Dr. Zhivago, Reynek’s work seems to avoid political realities, focusing instead on living, on bearing witness and celebrating what seems small and inconsequential but, to the poet, reflects deeper and more lasting spiritual truths.”