The installation Grid Buster was exhibited in 1989 in the gallery of Biola University in Southern California. On the wall on the right hangs a small reproduction of the right wing of the famous ‘Grünewald’ Isenheim Altarpiece depicting the resurrection. The reproduction is illuminated by a little picture light, which is plugged into a succession of surge protectors. In the middle we see a carpet with a plaid pattern. The resurrected Jesus of the altar seems to have erupted from the carpet onto the wall, leaving behind the imprint of Jesus in wild waves of rubber padding on the floor covering. On the left stand two audio players playing Gregorian chant interrupted every few minutes by the roar of a vacuum cleaner. When one leaves the room, one is handed a black and white detail of the artwork with a line from Hebrews 10:1: ‘Only a shadow of the good things to come and not the very form of things.’ 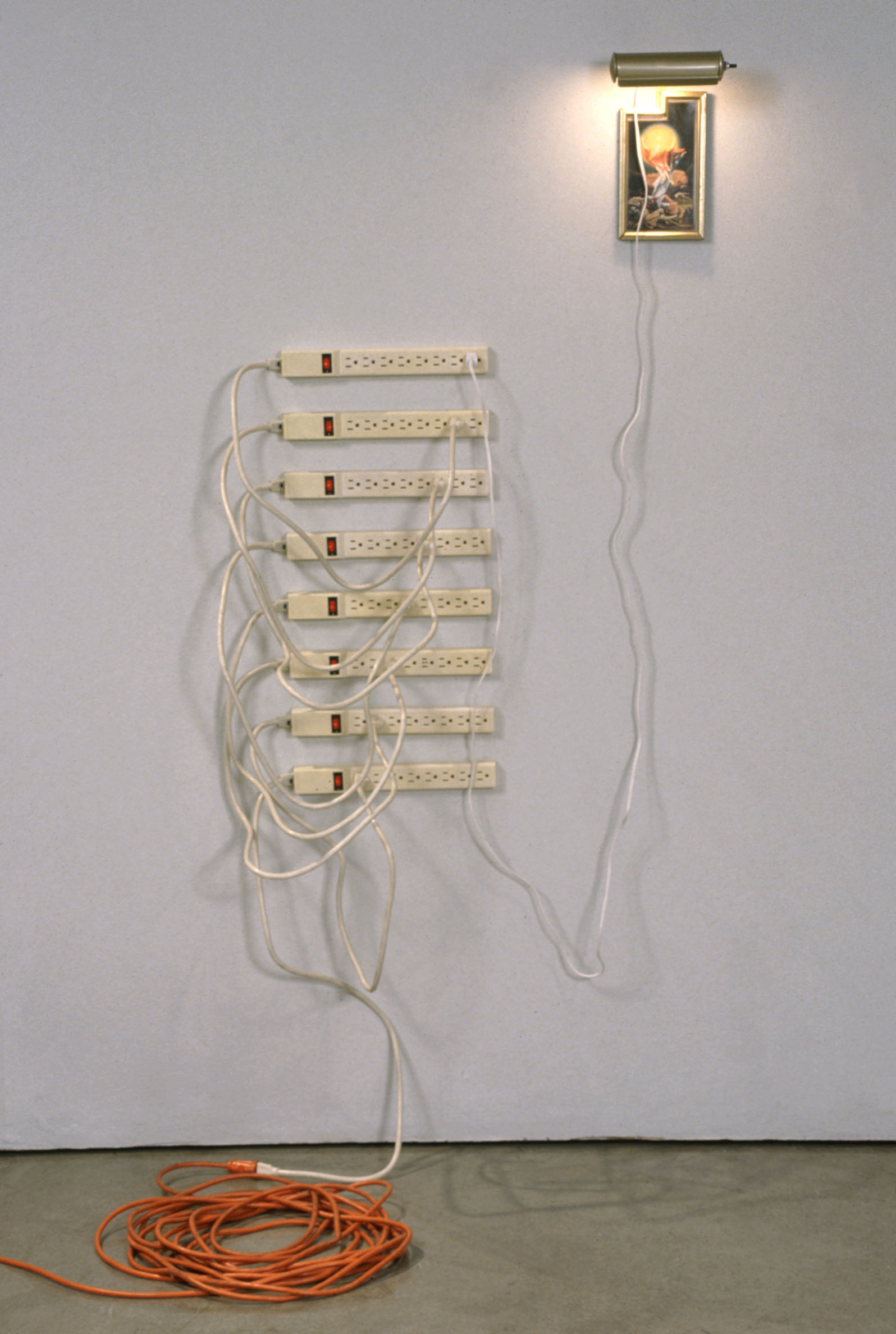 American artist Lynn Aldrich focuses in her art on the representation of ideas, especially about contemporary life and culture, reality, humanity and the triune God. In her conceptual approach to art she makes use of objects and materials from everyday life that become metaphors for the ideas she wants to express. She says: ‘What I am thinking about is complex or paradoxical, but when it comes to putting this into form through images or materials, I am naturally attracted to simplicity… I am interested in the accumulation, repetition, and presentation of ordinary objects, materials and images.’ She has made use of slices of bread, garden hoses, sponges and dishwashing brushes to speak about the transitoriness of life, sin, baptism, abundance and new life. Her work, moreover, is not deprived of humour, which you may also sense in the work discussed here. But, as she herself frankly admits, her work only gives away its secret if you take time to reflect on it, ‘you can’t get a quick read.’ 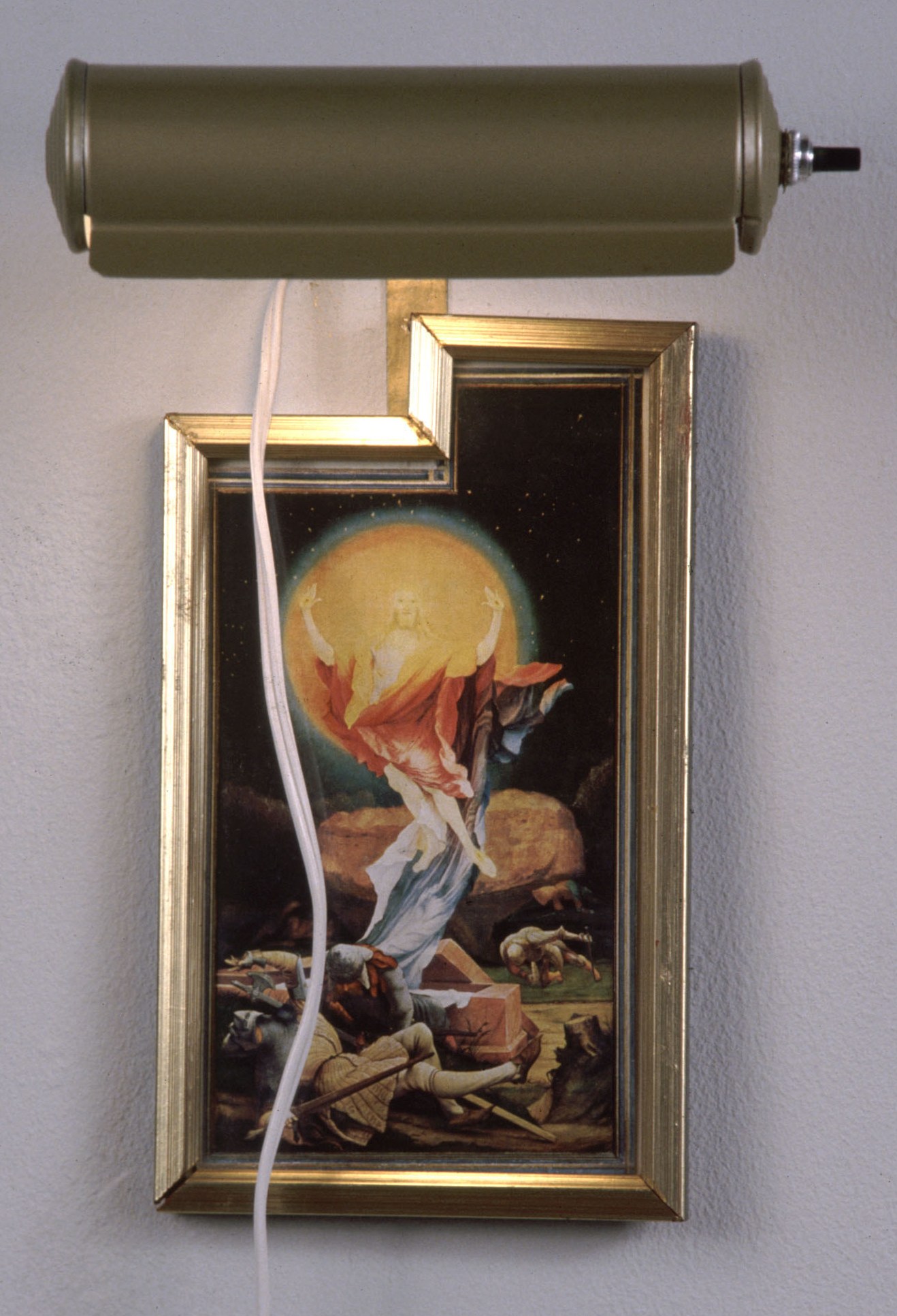 In our exploration of the meaning of Grid Buster let us first focus on the ‘Grünewald’ reproduction. We see a luminous Christ rising from the grave, the cloth he was wrapped in falling down to the ground behind and underneath him. As in the orant figures of early Christian art he raises his hands in a gesture of prayer and reverence, while also showing his wounds in victory. Behind the glorified body of Christ we see a large circle of light as a nimbus expelling the black night. The soldiers cannot bear the light of the resurrection explosion: thunderstruck they have thrown themselves on the ground.
Various elements of the Isenheim Resurrection recur in the installation. First of all, of course, Jesus is in the same pose on the wall. But also the enormous power that accompanied the resurrection in the older work, is paralleled in the new work by the great number of surge protectors necessary to absorb the dangerous blast of electricity flowing from the risen Jesus. The circle of light behind Jesus in the altarpiece we find in the Aldrich behind Jesus on the wall with the light falling from there across the carpet. Jesus has, moreover, taken the pattern of the carpet into his resurrected appearance, not shedding the cloth of death here but instead taking it up into himself as the fabric of our dead lives.
With the commonplace pattern of the carpet the installation makes the connection with contemporary prefabricated habits of life. It also links to our times with the brute sound of the vacuum cleaner that keeps on disturbing the elevated tones of the Gregorian chant. Aldrich comments on this: 'From a bad taste decorator den carpet in a modernist grid erupts this very baroque almost Dionysian image of Jesus. I like the feeling that a powerful, supernatural event could happen in anybody’s rec room… Christ rising from the grave of suburban melancholia.’
It is significant that the glorified Jesus is covered with the pattern of the plaid, that seems to represent earthly reality. By becoming human like us, in his death he took upon himself the sick and sinful patterns of human life. In contrast with this the figure in the rosy spot on the carpet is stripped of its squared design: the human being freed of its old man, born again in flesh-coloured nudity, free to give form to its existence in its own unique grid busting ways. The resurrection of Christ delivers humanity with explosive resurrection power from the straitjacket of evil. Christ raised from the dead means new life for us, even now! Change and growth are possible, even though this earthly life will never be perfect and for the time being will remain ‘only a shadow of the good things to come and not the very form of things.’
Grid Buster, 1989. Carpet, carpet padding, surge protectors, stereo arrangement of Gregorian Chant and vacuum cleaner noise, 10 x 17 feet. Courtesy of Sandroni Rey Gallery, Venice, CA.
For more information about Lynn Aldrich, go to http://www.carlberggallery.com/artists.php and imagejournal.org/page/artist-of-the-month/lynn-aldrich
ArtWay Visual Meditation Easter, 2010