Advent - Care for the Earth

Madonna and Child – Care for the Earth 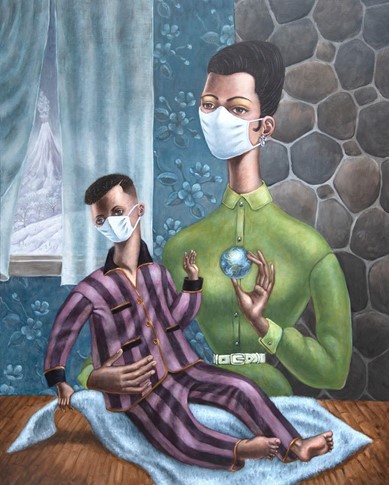 On the World Day of Prayer on September 1, 2016 Pope Francis suggested to add an eighth work of mercy: care for the creation. Both the Pope and his namesake Frans Franciscus took the name of the medieval saint intentionally. Frans Franciscus devoted a painting to this eight work in 2017. It refers in various ways to earlier art: this could be a Madonna with Child, a mother with a sick child after Gabriel Metsu and even an Adam and Eve.

Through the window in the background we see the earth erupting. The left side of the wall has flowery wallpaper; the right side looks like a pattern of snakeskin. Mother and child are portrayed with masks, as if Franciscus could look into the future. Mary holds up a globe threatened by environmental disasters, in the format of an apple. Jesus turns his head away, he cannot look at the decaying planet earth and holds on tightly to his comfort blanket. But with the other hand he blesses the creation that is ruined by evil.

For more materials for Advent and Christmas, click here