Botticelli: Madonna and Child, with Saints

Botticelli: Madonna and Child, with Saints 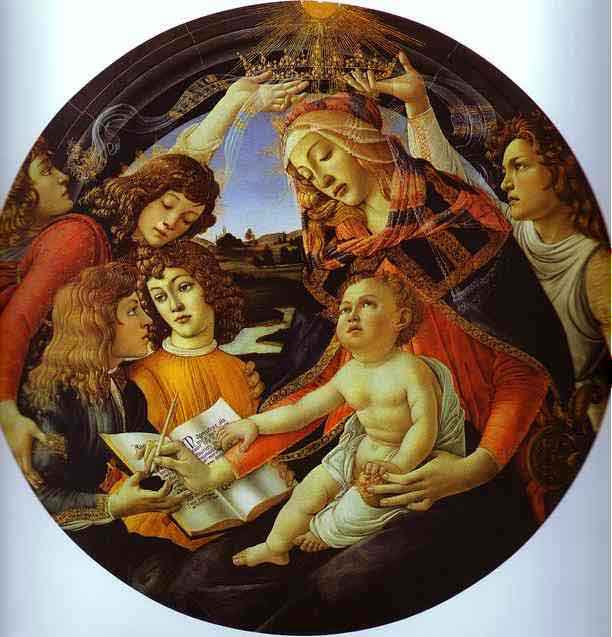 Botticelli’s Madonna and Child, with Saints
by Luci Shaw
Jesus looking like a real baby, not
a bony homunculus, solemn and all-knowing.
The quill in the hand of his newly-minted mother
stretches toward the bottle of ink a beautiful boy saint
is holding out. He has waited for centuries for her
to write in a book the next words of her own Magnificat,
for the Gospel of St. Luke, and for us to sing in church.
Two other youths try to lower a crown onto her head.
It is too large for her, and they’ve held it there for so long,
but she seems bored with royalty, eyes only for
her son, and his for her. In her left hand, as she
supports the child, she holds a pomegranate
under his fingers for him to pluck, its red leather skin
peeled back to expose its packed rubies.
Centuries later the paint and the fruit are fresh
and tart as ever, glowing like blood cells.
I wonder about sound in the room--small talk among
the impossibly adolescent saints. Mary talking baby talk,
perhaps, or singing as if she has swallowed a linnet--
Mary with the pale green voice, nothing coloratura,
more like grapes glowing from a low trellis.
In the moist Italian twilight, a cricket is likely to be sawing
like the sawing of cedar boards in the work room just outside
the painting’s frame--Joseph laboring on a baby bed.
But there isn’t a bird or an insect. There is just this lovely girl,
waking to motherhood, humming, content in this
moment in time, to be God’s mother, to hold Jesus,
when he cries, to her leaking breast.
As Botticelli lifts with his skilled hand a fine brush
to add the next word to her song, we look with him
through the lens of his devotion into this ornate room.
He paints love pouring through her skin like light,
her eyes resting on the child as though
he is all there is, as though her knowing will never
be complete. Right from the beginning
“How can this be?” circles her mind with its echo.
*************
Sandro Botticelli: Madonna and Child, with Saints, c. 1485.
Sandro Botticelli (1445-1510). In an article about five Renaissance artists art history professor Rachel Smith writes: ‘Botticelli represents a poetic current in Renaissance art that appealed especially to the wealthy ruling elites of the time. He had a distinctive painting style characterized by a strong decorative appeal. The tapestry-like Primavera (Spring) and The Birth of Venus, perhaps his two most popular and widely reproduced paintings, reflect the concern for reconciling classical philosophy with Christian theology among the humanists who dominated the court of Lorenzo de' Medici. Botticelli's work took on a different tone after Savonarola's arrival in Florence. Savonarola's fiery preaching called for the cleansing and renewal of both the church and Florentine society. More somber in both subject and treatment, the paintings of the 1490s seem to reflect the growing tensions in Florentine society that arose, at least in part, from Savonarola's railing against both personal sin and institutional corruption.’ For the whole article by Rachel Smith, click here
Botticelli’s Madonna and Child, with Saints was published in Luci Shaw, What the Light Was Like, 2007.
Luci Shaw was born in 1928 in London, England, and has lived in Canada, Australia and the U.S.A. A 1953 high honors graduate of Wheaton College in Illinois, she became co-founder and later president of Harold Shaw Publishers. Shaw is a frequent retreat facilitator and leads writing workshops in church and university settings. She has lectured in North America and abroad on topics such as art and spirituality, the Christian imagination, poetry-writing, and journal-writing as an aid to artistic and spiritual growth. Shaw is author of ten volumes of poetry and of a long list of books. Her most recent books are What the Light Was Like (Word Farm), Accompanied by Angels (Eerdmans), The Genesis of It All (Paraclete), and Breath for the Bones: Art, Imagination & Spirit (Nelson). She and her husband John Hoyte live in Bellingham. www.lucishaw.com
ArtWay Visual Meditation December 19, 2010