Art Stations of the Cross: Reflections on Artistic and Curatorial Interpretations of Suffering in Biblical and Contemporary Times

During Lent 2019, the multiple-site exhibition Art Stations of the Cross took place in the historic heart of Amsterdam. This international exhibition concept of artistic reinterpretations of, and reflections on, the traditional Stations of the Cross first took place in London in 2016. In the following years, exhibitions were staged in Washington D.C. and New York City. Initiated by dr. Aaron Rosen and Reverend dr. Catriona Laing, each Art Stations edition consists of a new constellation of art works and locations. The Amsterdam edition was the first one curated by locally based curators, with works of seven Dutch and seven international artists. In its engagement with both Biblical and contemporary forms of suffering, the exhibition addressed complex topical issues without losing a sense of hope out of sight.

The earliest sources about the Stations of the Cross are traced back to a travel report from 384, in which a Spanish nun reported the practice of people walking the Via Dolorosa – the path on which Jesus carried the cross from Pilate’s palace to the hill of Golgotha. Over time indications of events that had happened on this path transformed from simple inscriptions to the emergence of chapels at the particular stops along the route. Crusaders returning from the Holy Land introduced the practices into European contexts. This translated into the emergence of paintings depicting important moments along the path being placed in churches.

Initially the depicted topics and number of events varied (between five and forty-three). Over time, the iconic series of fourteen stations was established. Nine out of fourteen are mentioned in the New Testament; five have their origins in legends and folk tales. In the twentieth century, a fifteenth station has emerged – the resurrection. This station reinforces the mystery of life after death, of suffering leading to new forms of life. During the period of Lent, traditionally the meditative round along the fourteen stations in church are made on Fridays, culminating in Good Friday. Passages of the Passion story are recounted and through prayers and meditations the suffering of Jesus is related to contemporary forms of suffering.

The Art Stations of the Cross exhibition concept ties into this latter part of the ritual practices, establishing a connection between the passages of suffering in the Scriptures and contemporary suffering relating to issues such as refuge, injustice, and inequality. The curators of the Amsterdam edition, Aniko Ouweneel and Marleen Hengelaar, chose the narrative of the traditional fourteen stations and the extra one of the resurrection. This was communicated as fourteen plus one stations, because the idea of fifteen Stations of the Cross is not necessarily a widely accepted given.

Operating within the overall framework of the Stations of the Cross narrative, the curators maintained a broad approach to the themes of the individual stations. Each station was curated with the combination in mind of the station theme, the artwork’s theme and/or its maker’s biography, and the location hosting the artwork. This triangular approach resulted in a complex operation, because all elements needed to be right for each of the fourteen (plus one) stations. Eventually, the exhibition constituted of thirteen locations, with one location hosting two artworks each representing one station and another location hosting one artwork that represented two stations at once.

One such location where the three elements of the curatorial process matched very well, was the Art Station in the public gallery of the Amsterdam Museum. Specifically for this project, the museum had hung the triptych of paintings Out of History (2013), by Iris Kensmil in this public gallery. The painting depicts three Surinamese figures, each with a life story of battling against slavery and for personal freedoms. While the names of these individuals are known, their likenesses are not. By means of her paintings, Kensmil provided them with a face again, returning them a place of completion in history. The notion of fighting injustice, and particularly of individuals making the choice to battle injustice and in doing so helping others, is what ties this work to the Art Stations project.

The work in the Amsterdam Gallery was Station 5: Simon of Cyrene helps to carry the cross. It is a story of an individual who made the choice to help, in his own particular way, to release someone’s suffering, however temporarily. The Amsterdam Museum is located in the former Citizens’ Orphanage of Amsterdam, where between 1580 and 1960 tens of thousands of children lived. The entrance gate at the Kalverstraat is decorated with a historical plaque, displaying the weapon of Amsterdam with the three Andrew Crosses, which summons its onlookers to “help carry a little.” The connections between the station theme, the artwork, and the location came full circle here.

For the Amsterdam edition, the curators decided upon the overall theme “Troubled Waters,” with two frequent returning sub-themes: environmental and social injustice. The theme of Troubled Waters focuses on Amsterdam as a city of water, with its harbor and many canals. Traditionally, the patron saint of Amsterdam is Saint Nicholas, the protector of sailors. This is the reason why the Art Stations route spread between Station 1 in the Saint Nicholas Basilica across from the Central Stations and Station 15 in the former Saint Nicholas Church, now called Oude Kerk (Old Church).

Water is not only a source of beauty and biblical miracles, but also a source of problems and danger. Within the context of Art Stations of the Cross, water is symbolically present in a number of ways: how water forms a life-threatening barrier for refugees; how water in the oceans is suffering from man-made action, resulting in pollution and rising sea levels; and how travelling the earth’s waters has led to dark sides in world trade with slavery and human trafficking. 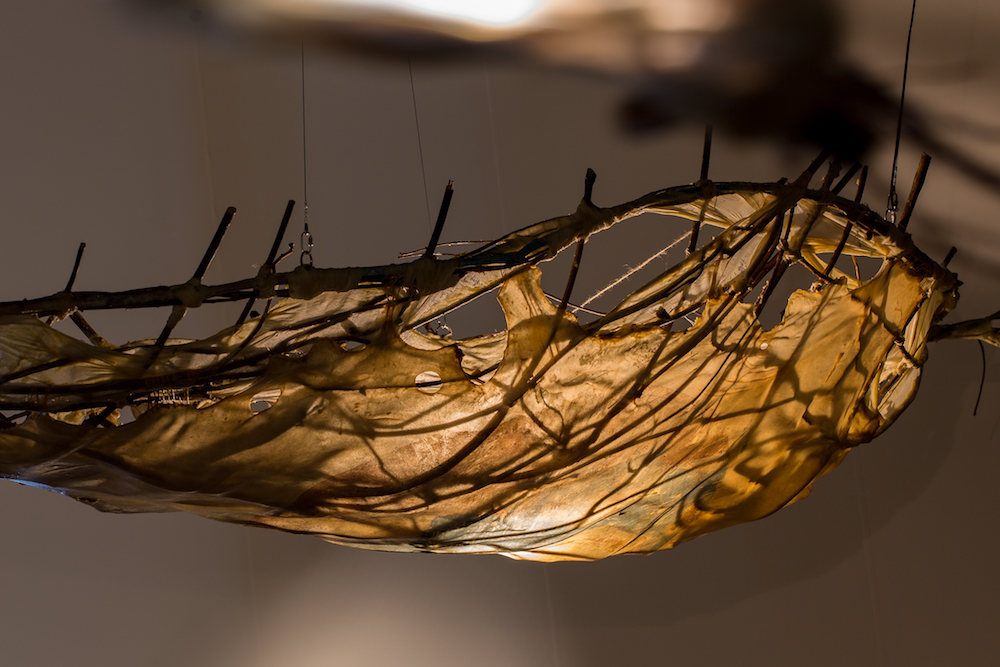 The artwork with Station 11: Jesus is nailed to the cross, was located in the Walloon Church, an originally French-speaking church. And still, French services are held there, in addition to a lively cultural program of music, performances, and art projects. In 1578 this medieval church of the Brothers of Saint Paul was put at the disposal of French-speaking Protestant refugees from France and the Southern Netherlands. Since then, the church has been called Église Wallonne. This history is what made the representatives of the church’s current congregation respond to the proposed work Salt Water Skin Boats (2018) by Erica Grimm, Sheinagh Anderson and Tracy Stewart.

These Canadian artists created an installation of coracles created of organic materials as well as ocean maps, and an accompanying soundscape of waves. While the artists tied their installation strongly to theme of the station, with the question whether humans are sacrificing – or even crucifying – the earth, the congregation saw its own history of refuge and survival represented in the precarious organic boats. This was one of the reasons why they agreed on having this work, which gained a literal presence in the entire church, installed in their midst. 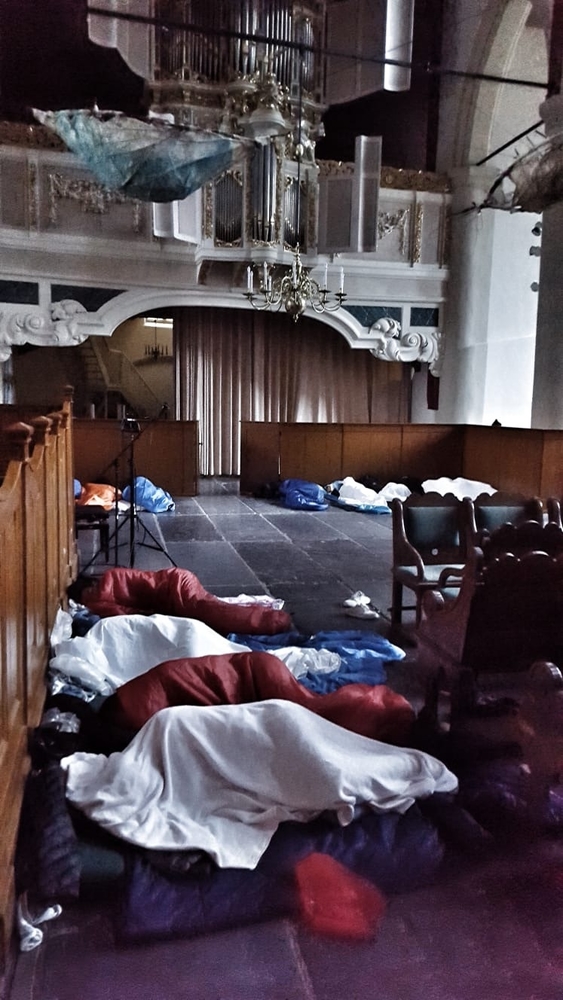 Wholly unexpected, during the exhibition period, the church temporarily again became a place of refuge. When the city council of Amsterdam stopped its winter shelter program, a large group of waitlisted homeless, and sometimes undocumented, people had no place to sleep. Ad-hoc the Code Red Network (consisting of the Protestant Church Amsterdam, Amsterdam City Rights, Caritas Amsterdam, Stap Verder, and several city churches) organized a week in which every night this group could find shelter in a church. This not being a sustainable solution, the Network intended to demand attention for this problem for local officials. One of the participating locations was the Walloon Church, in which people with no place to go spent the night on the church floor under the Salt Water Skin Boats. The remaining photograph documenting this event hurts the eyes, in which the art not just confronts its viewers with their own ideas or thoughts on refuge or environmental issues, but has become an entirely helpless – and to me even hopeless – part of the harsh realities it aims to address.

Despite the challenging theme of Troubled Waters, throughout the exhibition route ran a persistent notion of hope. No matter how harsh or helpless the issues seemed to be that were addressed in the connection between the station themes and the topics of the artworks, the curators generally found a way to emphasize even the tiniest hints of light in each Art Station. This was already apparent in the decision to add a fifteenth (or plus one) Station to the iconic fourteen Stations of the Cross. The notion of resurrection is a hopeful theme. The narrative of suffering culminated in the notion of resurrection, of the promise and potential of new life, of a different life. 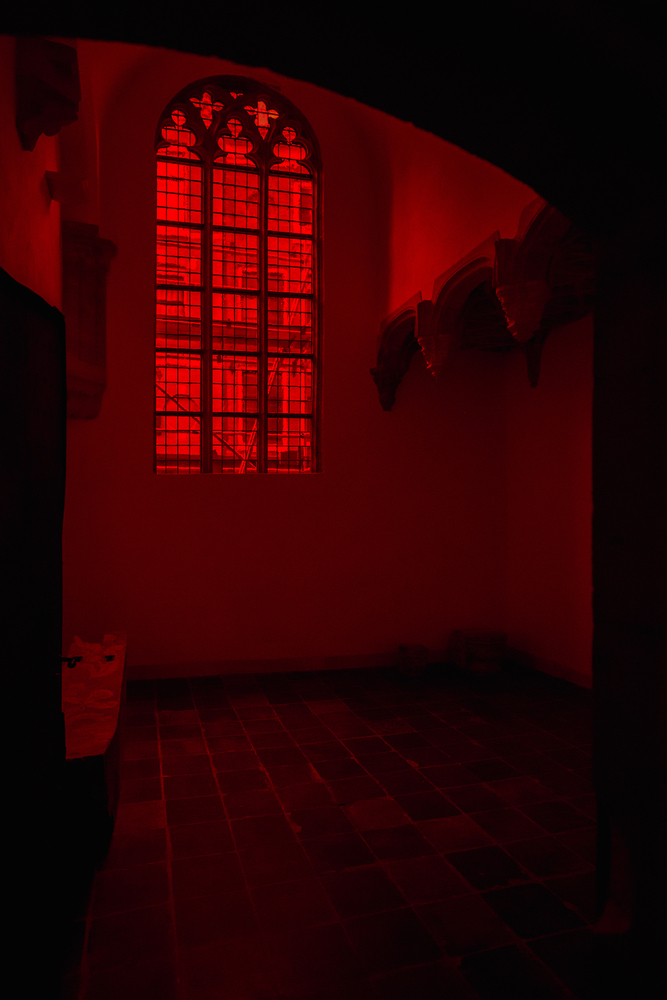 The fourteenth and fifteenth Station were represented by one and the same artwork, Anastasis (2018) by Giorgio Andreotta Calò, located in the Holy Sepulchre Chapel of the Oude Kerk. The work consists of a red glass installed in the only window in the chapel. It is a remainder of the exhibition Calò installed over the summer of 2018, where he covered all the church windows with red foil. By one seemingly simple intervention he completely transformed the interior and the experience of being inside the church. The Chapel was built in 1515 and originally housed a group of sculptures depicting the deposition and mourning of Christ. During the iconoclastic fury of 1566 the sculpture were destroyed, yet today we are reminded of their once presence by the canopy under which they were placed. In the context of the Art Stations project, this absence of presence becomes a metaphor for the death and resurrection of Christ. Calò’s intervention did not physically change anything inside the Chapel, yet his intervention changed everything – he transformed people’s vision and embodied experience of being inside the Chapel.

Even in relation to the most shocking artwork in the Art Stations route, a glimmer of hope persisted. Station 13: Jesus is taken down from the cross. The wall- and catalogue texts warn the viewer this is “one of the most violent depositions ever made.” In the deposition scene The Last Days (2016) by Jan Tregot, Christ is violently decapitated and his body mutilated. Displayed on a blood-red pedestal, Tregot challenges the viewer to reinvest crucifixion scenes, which arguably have become subject to emotional inflation because of their omnipresence, with the sense of horror and shock it should incite. The curatorial team of the hosting location, Museum Ons’ Lieve Heer op Solder, decided to offer a counter balance to this embodiment of shock. Across from Tregot’s sculpture, they placed a medieval Pieta sculpture from their own collection, on a bright yellow pedestal. At that end of the exhibition room, a musical fragment of the Stabat Mater was played. Through this curation, notions of sorrow and loss were restored to tenderness and commemoration. 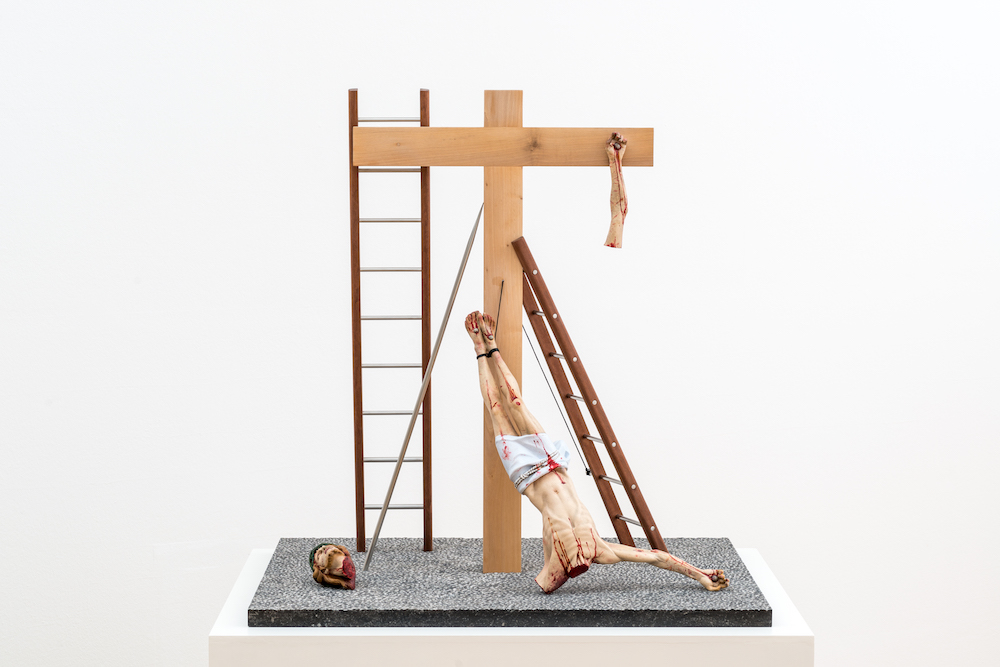 By now, Art Stations of the Cross: Troubled Waters has come to an end. All that remains is the catalogue, in which the artworks are discussed in relation to the Station themes. And, of course, there are the host locations in which the artworks once stood. In this sense, Calò’s Anastasis (Greek for “resurrection”) has become a metaphor for the entire project: the absence of presence is what remains of the Art Stations in Amsterdam.

Lieke Wijnia (1985) is affiliated as a fellow with the Centre for Religion and Heritage at Groningen University, The Netherlands. She works as curator of modern and contemporary collections at Museum Catharijneconvent in Utrecht.