Steven was born in 1964 in Katwijk aan Zee, The Netherlands. For many generations his ancestors were involved in fishery. His grandfather and an uncle were the last in a long line of men that sailed the sea. Reorganizations made them give up professional fishing.

As a child Steven loved the outdoors. On the way home after school he first went to the dunes and the beach. At a very early age he was able to determine all Dutch bird species. His talent for drawing was noticed already in kindergarten.

During childhood he was immersed in the religious environment of Reformed Pietism and as he was a sensitive child he readily connected with it. During secondary school he began to feel closed in by it. In Amsterdam he came in touch with modern theology. Feelings of uncertainty and doubt increased, but his interest in the Jewish faith and a study of Hasidism guided him to the work of Marc Chagall, Elie Wiesel and A.J. Heschel. Also Chaim Potok and philosophers like Buber and Levinas prevented him from leaving the faith of his family.

Also in the world of rock music Steven Barnhoorn found traces of faith. This music was strictly prohibited in his parental home, but a group like U2 kept him on board. Music still plays an important role in his life. He regularly plays the guitar and apart from his own songs he likes to sing English psalms straight from the Bible … as a singer-songwriter….

His interest in art could be called innate. It came from within. Nobody gave any cause for it, as Steven was the oldest child and did not have any example. His father only took up drawing and painting when he discovered the talent of his son!

Initially he thought he could only be ‘successful’ as a good artist if he could portray things naturalistically. After first selecting the Royal Academy of Art in The Hague for his training, he decided to go to Teachers College in Amsterdam instead, as he wanted to be able to make a living with his trade.

After his studies he taught young people, adults, drug addicts and handicapped people. He likes to share his talent with others. Besides work that is inspired by nature, biblical stories have become increasingly dearer to him. This resulted in an number of exhibitions in churches in Assen. He has also designed various thematic issues of the church newsletter in Assen. In addition he has made work for Easter worship services.

His rendition of biblical stories is shaped by his childhood, but also by his own questions and interpretations, which are not always similar to those of the faith community of his youth. For instance young Saul. As a child Steven asked the question why this young man was hiding. According to him Saul simply wanted to become a farmer like his father and not really a king. He did not have any example either, no father who was king. On top of it all the prophet Samuel made a fool of him in front of his men. No wonder the situation ended in disaster.

Steven likes to work with acrylics, as they are rich in possibilities and can be thinned with water. Working with water is great, as it leads to capricious and unexpected results. Sometimes he works with oil on panel, painting in a ‘classic’ manner out of respect for the old craftmanship.

Jacob’s Ladder, 50 x 50 cm, acrylics. This painting portrays my place of birth, Katwijk aan Zee, with the white Reformed church and the ladder that points to the church entrance from the sea – a symbol of the faith that was revealed to me there. 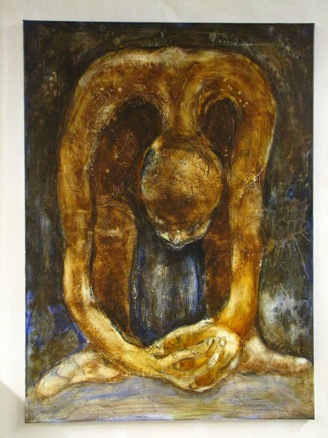 Job 3:3, 80 x 110 cm, acrylics. Job bows down, yet his hands are folded even in his deepest cry of despair. I can remember that when my father read this story from the old Bible, it really distressed me. I said: ‘Then Job must have really badly suffered!’ At the present I really value the story of Job and what it has to say about good and evil and the question whether God has a dark side.

On the internet http://www.stevenbarnhoorn.nl. Also many pictures can be found there, as for Steven Barnhoorn photography has to do with looking, seeing and amazement.