William Blake: The Book of Job: When the Morning Stars Sang Together 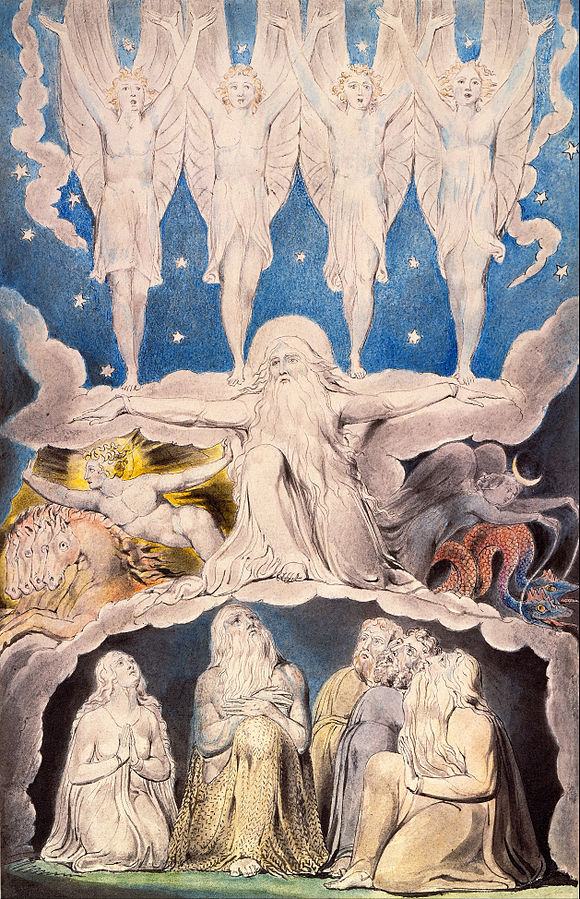 The Book of Suffering

The Book of Job is a book of suffering. It engages with intense honesty the hardest of human questions, that of suffering and evil in a world created by a loving, good, and all-powerful God. It does so through the story of righteous Job who, within a frighteningly short time, lost everything.

The English poet and artist William Blake grappled profoundly with the issue of suffering and evil, most notably in his famous poem The Tyger and through his many visual works inspired by Job. The image featured above comes from a series of nineteen watercolour illustrations of The Book of Job created for his patron Thomas Butts.

Its title comes directly from chapter 38 of Job where God, who has been silent throughout Job’s long suffering and desperate questioning, now begins his climactic response. Strangely God does not provide Job with answers. Nonetheless, as his speech ends in chapter 41, Job is satisfied. How could this be?

Through this three-tiered illustration Blake pulls out three significant threads from God’s speech which help us with our question. At the top of the image and most visually striking, our artist brings us to see the goodness of God’s work in creation. From the text, Blake limits himself to God’s question from 38:7 in which Job is asked where he was “when the morning stars sang together and all the sons of God shouted for joy.” Of course, along with speechless Job, we acknowledge that God was the prime actor that day. In this one scene Blake beautifully captures the purity, goodness and joy of God’s handiwork. The praising angels and singing stars evoke so perfectly the glorious and boisterous days of that pure morning joy.

In the middle section Blake pictures for us God’s sovereign power over heaven and earth, over darkness and light, and over good and evil. From God’s speech, our poet-artist chooses again a morning theme to make this point. God says in 38:12-13:

Have you commanded the morning since your days began,
And caused the dawn to know its place,
That it might take hold of the skirts of the earth,
And the wicked be shaken out of it?

The discordant note in this section of God’s speech—How did wickedness enter the good creation?—is presented without apology. However, it must be said that it is in dealing with evil that God’s sovereignty proves essential.

Placing him centrally in the painting, Blake shows the Lord calm and in full command. With his right hand God orders the sun to rise and light to break forth: the face of Apollo who rides the four-horse sun chariot is set with determination to bring in the dawn. With his left hand, God subdues the darkness and the night is banished: The face of the woman crowned with the moon is fearful as she is being chased from the sky. It is less obvious who she might be, but her chariot, pulled by a two-headed serpent, suggests either Demeter visiting the underworld or the demi-goddess Medea who slaughtered her children out of spite. Either way Blake’s use of these classical allusions reminds us that God is sovereign over the supernatural as well as the natural, and over sin and death.

Finally, we come to the third thread of God’s reply presented at the base of the picture. Here we see Job along with his wife and friends almost crushed in the dark space in which they are enclosed. Job is naked under a rough covering and boils are still seen on his body. He has not yet been relieved of his suffering and all of them are seen to dwell in darkness. Nonetheless, he and his companions have taken a posture of worship, as does Job in chapter 42:5-6:

I had heard of you by the hearing of the ear,
But now my eye sees you;
Therefore I despise myself,
And repent in dust and ashes.

What has Job seen that brings him to lay aside his complaint and worship God? It is helpful to notice in our watercolour that God and suffering Job are almost identical in appearance. In fact, all five people must be recognized as bearing God’s own image. When we suffer, how helpful it is to remember that God has, in love, shared his image with us, that even at our deepest point of need we are reflections of his glory! Blake leads us to consider this yet more profoundly. As we bear the marks of God’s image, God also bears marks of ours. Observing the figure of God one more time, we see, in his humble kneeling posture and in his outstretched arms, a sober reminder that he himself is no stranger to suffering (cf. Job 38:17).

Where is Job’s comfort? God truly is good, and sovereign, and loving. But it is by wisdom that God withholds answers to Job’s suffering. In their stead, he gives himself.

William Blake was an English artist born in 1757 in London where he died there in 1827, leaving behind his wife and co-worker of many years. Trained at an early age as an engraver, Blake excelled at this art, developing his own method of relief etching and earning his income through this skill. He was also a gifted self-taught poet who began writing at the age of twelve. As poet and artist, Blake felt that image and word belonged together. He thus wrote and illustrated his own works of poetry and some rather unorthodox visionary prophecies. In addition, he also illustrated his favourite classics including Dante’s Divine Comedy, Milton’s Paradise Lost and the Bible. The Book of Job was a personal favourite and he illustrated it many times from the 1780s until the end of his life. As a devout Christian, Blake was driven by a visionary mind and a heavenly imagination. These led him away from the established church and toward his elaborate visions and somewhat unorthodox interpretations of Scripture. When he died, it is reported that he did so in the most glorious manner, “singing of the things he saw in heaven.”

Irena Tippett has a Master's degree in Art History from the University of Toronto, but it was during studies at Regent College, Vancouver, B.C. that she discovered the beauty of her field in relation to her faith. While most of her energy is presently spent in women's ministry at St. John's Anglican Church in Vancouver, B.C. Canada, she continues to lecture from time to time out of this newly found passion.