The Doopsgezinde Singelkerk (Mennonite Singel Church) is one of the special locations of the contemporary art pilgrimage Art Stations of the Cross, to be experienced in the heart of Amsterdam this Lent. This hidden church (a church that is not recognizable as such from the street) dates from 1639. In the 16th-century the Anabaptists had an extraordinary history. In Amsterdam they were called the ‘naked runners’, who proclaimed the ‘naked truth’ to the city’s people. They considered all possessions, clothing included, as the dross of the earth. Now, in this open-minded Mennonite congregation, two artworks in which nudity plays an important role take shelter. Nudity means something else here than being naked or without clothes. It represents a transparency. We are all born naked and naked we leave this world. Nakedness also refers to the state of our souls.

The entrance on the Singel leads to the church through the so called ‘cloister’, two ancient alleyways covered with marble. Recently the old water well of the building was excavated and is to be seen right next to the room where the 3D (stereoscopic) video-installation Josephine’s Well is placed: another surprising cross-reference between this artwork and the location.

This interactive installation stands for Station # 8 ‘Jesus consoles the women of Jerusalem’. In our turbulent times with growing insecurities you can react in two ways: try to save yourself in a Pavlovian response or, with spirit and compassion, ask yourself who is most affected by the storm. Jesus always had the impression that other people were worse off than himself. Why? Because he acted from a position of serene calm, from a profound relationship with the Creator. He saw how orphaned others were. While being tormented, he himself comforted the weeping women. 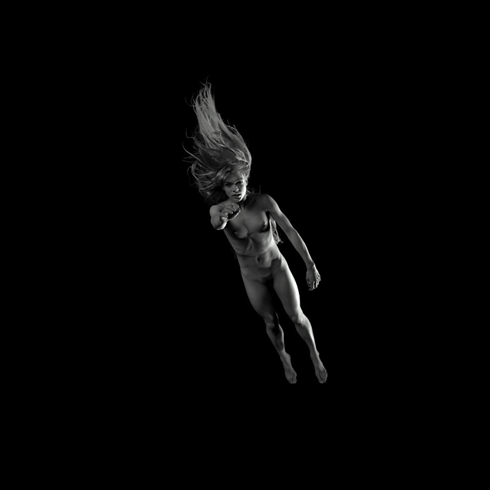 Everybody experiences this installation in a different way. Stepping up a few steps and through a curtain one enters a dark space filled with soft music. Here a video is projected on a large invisible screen in the ground. You use a pair of 3D glasses which make the figures of young girls and a female nude float towards you. In cosmic solitude powerful yet vulnerable creatures levitate closer as from the depth of a well. They look at you silently and you can almost reach their stretched-out hand (an effect of 3D, not to be experienced through a photo). They make an appeal. This results in, as inevitably in the case of art, a very personal experience depending on the history of the viewer. But somehow for each of us it is about being orphaned in the center of our beings, in our naked souls, and about the (im)possibility to touch each other. Perhaps it is also an exercise in compassion, in relating to the o/Other. The experience left me speechless.

The diptych Der Tod und das Mädchen found a place in the ‘cloister’ at the top of stairs. This oil painting stands for Station # 9 in this project: ‘Jesus falls a third time under the weight of his cross’. And yet he gets up again. Tortured, bleeding and exhausted, he still gets up. He wants to accomplish his task. The ultimate counterpoint to this third fall is Jesus’ resurrection from the dead on the third day after the crucifixion.

Artist Janpeter Muilwijk painted this work after the suicide of his daughter Mattia. The artist says: “In this traumatic period of my life, painting turned out to be a source of comfort, raising the big questions in a different way after the suicide of Mattia. There were no unequivocal answers, no definitive conclusions, but images that drilled down to a deeper layer, beyond thoughts and words. This series of paintings offered me a look into my own soul. In spite of the big shock of this great loss, they incorporate a calm presence of loveliness and comfort. Death is only a passage. My deceased daughter brings me into an endless space beyond my perception of finite life: the immortality of our souls.”

Jesus’ Via Dolorosa is a profound answer to the question: Does the world really matter to me? This compassion paved the way to the possibility of true encounter, true relationship. According to Christian tradition the death and resurrection of Jesus form the pivotal breakthrough in human history. Now Creator and creation can touch each other again and the journey of getting to know each other can commence. And this eases the solitude for all. Vulnerability, tenderness, love and compassion form the naked truth, where the human soul can come to rest.

Arent Weevers (Ede, 1958) is a Dutch artist specialized in spirituality and video art. He also works as a student pastor in Deventer. He studied theology at the Free University in Amsterdam and in Leiden. In 2010 he received the prize for ‘Best International Video Art Short’ during the New York International Film Festival for Mary! (2008). In 2014 Embrace Me was chosen during Unpainted, Media Art Fair in Munich, Germany as 'highlight of new media art'. www.arentweevers.com

Janpeter Muilwijk (Fontainebleau, 1960) lives and works in Middelburg, the Netherlands. He studied drawing and painting at the School of the Arts in Kampen and Architectural Design at the Hogeschool voor de Kunsten in Utrecht. www.janpetermuilwijk.com

Anikó Ouweneel is a cultural historian and art curator living in the Netherlands. She has curated Art Stations of the Cross together with Marleen Hengelaar-Rookmaaker. For more see www.visiodivina.eu.