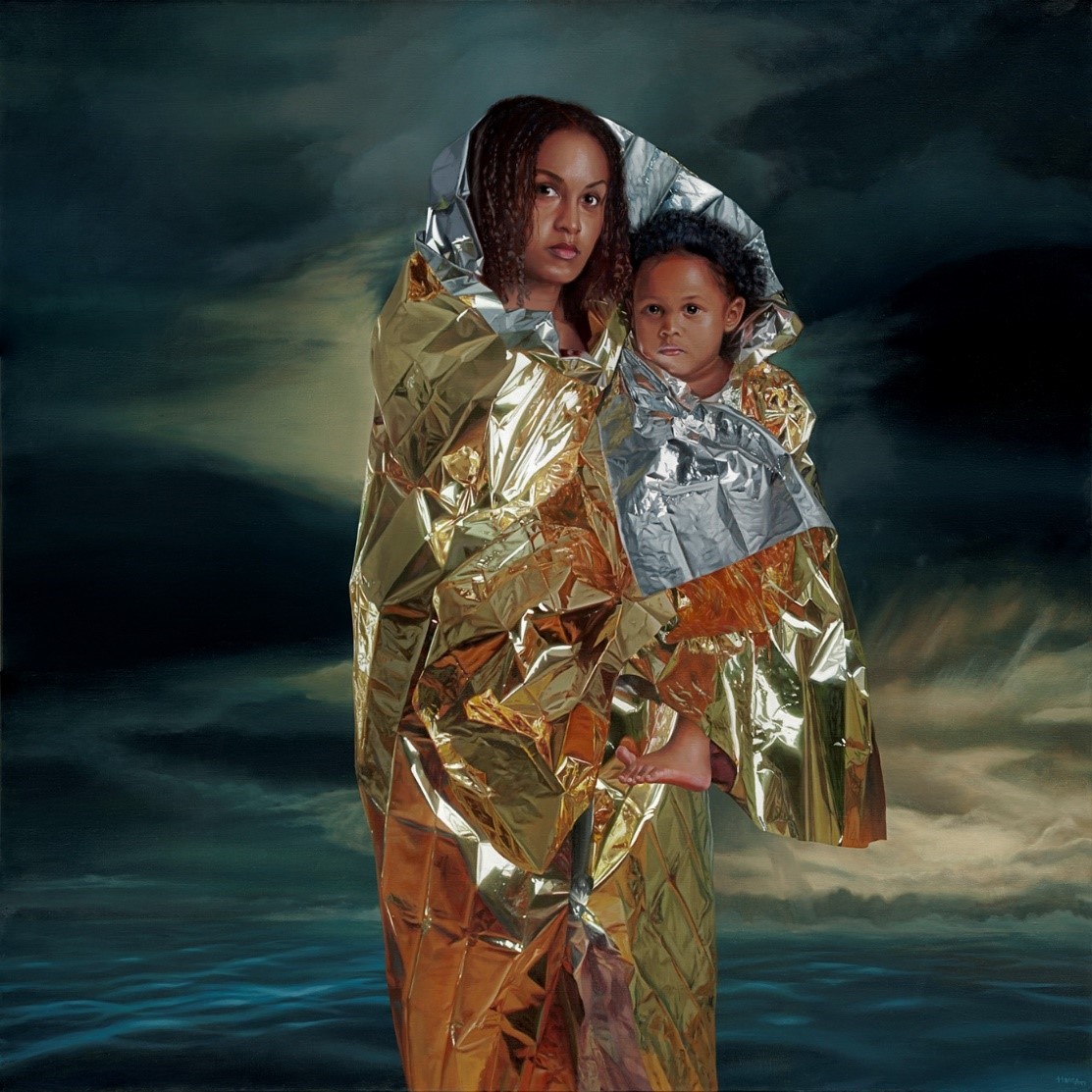 This iconic, modern Madonna is standing in her full dignity; she has no fear. Her thermal emergency blanket alludes to many other mothers along the coasts of the Mediterranean Sea. In that way she is contemporary. At the same time, she is the timeless mother who carries the promise of the future in her arms. She has become a question: Will you receive us in your heart?

You look at this mother and child and you understand how little you know. In our ignorance we struggle to react to what happens in the world and face its manifest challenges. She rises from the turbulent waters of the Mediterranean, but she does not look insignificant, sick, dirty, exhausted or malnourished. Not at all destitute.

Mother and child are coated with dignity. The mantle of love covers them in the form of a rescue blanket, the first sign of care and attention. The foil clothes them and keeps them warm, but there is more to it. The colours indicate a godly presence, perhaps even a divine origin. As if the Father himself is present in the image.

The Madonna and her child do not know fear because they are loved. Being covered with the cloak of love is the core of their dignity. And it is not dependent on a rescue blanket or on our reaction to their presence. It grants them self-respect, serenity, an inner royal demeanour. This kind of love expels all fear.

She is collected and calm. It is an honour to receive her.

The oil painting Madonna del Mare Nostrum is part of the contemporary art pilgrimage Art Stations of the Cross. It is the first station of this present-day stations of the cross and is placed in the Basilica of Saint Nicholas in Amsterdam. Just like the final location of the route, the Oude Kerk (Old Church), the basilica is dedicated to Saint Nicholas, the patron saint of children, sailors and the harbor city of Amsterdam.

Madonna del Mare Nostrum has been placed in front of an altar dedicated to Mary, below a late 19th-century wall painting of the first station of the cross (every Catholic church has its own Stations of the Cross), where Jesus is condemned to death.

Hansa (Hans Versteeg) developed rapidly as an artist from ca 2000 onwards. As a versatile designer his free style work plays an ever-growing role, initially in the form of his photography.  Unexpectedly, for himself and others, Hansa made a change in 2010 to oil painting as an art form. Over a short period of time, he developed into a painter with a major talent for rendering fabric, similar to the masters of the 17th century such as Gerard ter Borch. Hansa, however, is inspired by the subjects in the contemporary world of the 21st century, as can be seen from his cellophane wrapped flower-still life subjects. His paintings often tend towards hyperrealism are characterised by an interaction of sparkling and sometimes contrasting colours, light, reflection, movement and a photographic approach of the depicted objects by sharpening or blurring them. This creates an effect that is only rarely applied in painting. The paintings feature a subdued calm and serenity securing the intimacy of the work of art. According to Hansa these are the preconditions for a successful work of art: intimacy and the search for the perfect balance between the emotional and the rational. Drs. Diana P.T. Kostman, art historian   http://hansaversteeg.com/

Anikó Ouweneel- Tóth is a cultural historian and art curator living in the Netherlands. She has curated Art Stations of the Cross together with Marleen Hengelaar-Rookmaaker. For more see www.visiodivina.eu and Stations of the Cross — Henry Luce III Center for the Arts & Religion (luceartsandreligion.org).