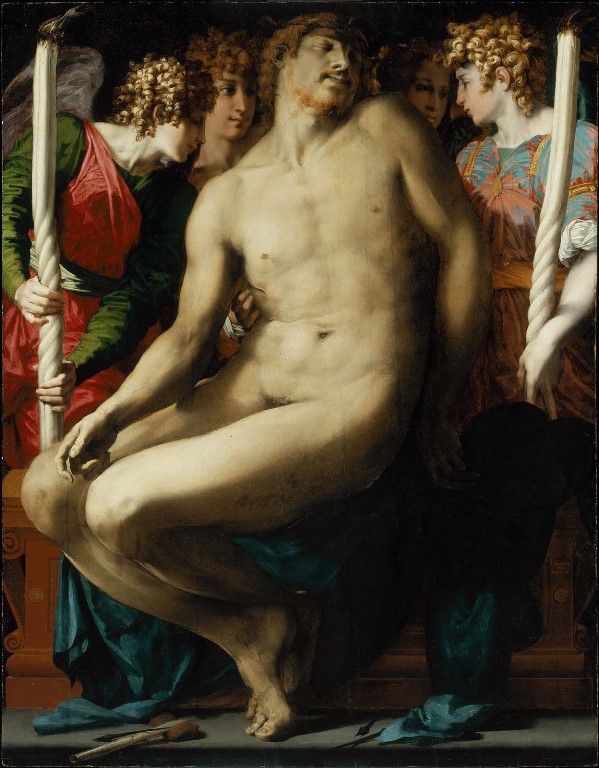 Of all artistic responses to the Easter story, this may be the most daring. The work grapples with the big questions and rewards patient, prolonged looking.

Biblical accounts provide much detail about Jesus’ last meal, his final prayers, his death and his burial. But at the heart of the story is a mystery, an unseen moment. When Jesus’ friends arrived at the tomb, it was already empty. What happened after the tomb was sealed, before the women arrived? Just how did the tomb become empty? What do we make of the most important claim about those days (indeed, about the entire life of Jesus): that he who was dead became alive again? And why do the answers to these questions matter to us today?

Rosso Fiorentino (1494-1540) provides a narrative – both natural and supernatural. The Christ he shows is not exactly dead (as the title says), but between death and new life. This is the liminal moment of the Resurrection. The tensile strength in this monumental figure’s crossed feet (three toes just touching the gray ledge) offers the first hint: arteries throbbing, these feet are about to twitch. Then we notice the large funerary candles. They are bending; the wax has softened in the heat radiating from this once-dead body. Just now, beyond our sight, the stone barring the opening to the tomb has rolled away. Early morning light has begun to pour in from the left, and a gust of wind has extinguished the candles, blowing smoke to the right. Christ’s still body begins breathing in the fresh air entering this dank space. Will the reed at his feet be transformed as well, into a serenading flute? Now look at his left knee and his massive thighs. Like the reed and the three long, sharp nails, his legs protrude illusionistically into our space. When Jesus, twisting like the candles, does indeed flex his thighs and feet, he will break the picture frame at its bottom – and his right arm will lift up and break the top. Beneath his crown of thorns, he begins to smile, relaxed and waking from a dream of secret, intimate joy.

The wound in his side shows no blood; his suffering is now past. One angel fingers the opening with almost erotic boldness, as the other three look on. Rosso casts the vigil-keepers as cloying and androgynous, a striking contrast to this muscular Christ, with his scraggly beard and flame-like red hair. Three of the angels, in their luridly colored gowns under their tight coiffures, gaze with alarming intensity at the resurrecting Christ, while one seems lost in wonder. Rosso renders the angels with increasing vagueness as he works his way down their waists and legs, declaring the tangibility of the naked body around which they gather. The furniture is strange, too. Jesus is seated on the edge of a sealed, bench-like sandstone sarcophagus which is far too small to accommodate him. With one push from an angel, he might just tumble from this shallow space into our own. Christ’s body – the Eucharistic feast – is completely present, his death as resolved as his birth, to which the painter refers by placing his navel at the perspectival vanishing point at the panel’s center.

Rosso invites us, the viewers, to join him in believing in the mystery of this moment, placed by purpose at the heart of the entire story. A feast of new and everlasting life in Christ, of rescue, sanctification and glory, awaits each of us. To receive the feast requires one act: open your eyes and believe. You, the viewer, are witness to this moment. Wrapped in the mystery, this truth stands: he is risen – and his victory over sin and death is beginning, here and now.

Rosso Fiorentino was in his early 30s, working in Rome, when he won the commission to create this large altarpiece. Its destination was a tiny village with a big name and a big history: the hamlet of San Sepolcro (Holy Sepulcher), tucked into an out-of-the way valley on the edge of Tuscany in the province of Arezzo. Despite its obscurity (its current population only 16,000), the village was proud of an identity rooted in two pilgrims returning from the Holy Land around 1000 AD with a stone raided from the Church of the Holy Sepulcher in Jerusalem. The painting’s commission came from Rosso’s friend and exact contemporary, the reformer Leonardo Tornabuoni (also 1494-1540), who was known for his championing of reverential Eucharistic theology. In 1522, at the age of 28, Tornabuoni had been appointed the second bishop of the new diocese seated in the village. Both young men must have planned the commission with a keen awareness of San Sepolcro’s history and the meaning of the village’s name. In particular, they recognized the importance of an earlier painting in San Sepolcro, later described by Aldous Huxley as ‘the best picture in the world’: the mid-1460s fresco The Resurrection of Christ, by the hamlet’s most illustrious native, Piero della Francesca.  In both cases, a muscular Jesus defies death atop a sealed sarcophagus, with four supporting characters. But Rosso’s awaking, naked, crowned yet bloodless Christ, equivocal in a dark interior, differs starkly from Piero’s wide-awake, garbed and haloed, bloody and victorious Christ, set in a landscape similar to that of San Sepolcro itself. For Piero the resurrection is an accomplished event reflecting harmonic confidence. For Rosso, it is a mystery to be solved – or at the very least explored. The evidence demands an honest investigation by artist and viewer alike. Rosso privileges each of us to enter the tomb, that we too may discover the astonishing truth of a new reality: this once-dead body is alive and transformed for all time. And in the discovery of this truth, another transformation awaits: of each of us, ourselves, awoken to new life.

Rosso Fiorentino (1494–1540) (literally, ‘Florentine Red-head’) was born in Florence as Giovanni Battista di Jacopo. He was a leading practitioner of Mannerism, the highly refined sixteenth-century style which succeeded the High Renaissance style of Raphael and Leonardo. Characteristic features of Mannerism such as strong, unusual colours, ambiguous and crowded space and elongated, twisting figures are all visible here. They reflect Rosso’s admiration of Michelangelo's frescoes on the Sistine Ceiling, painted not long before this panel. After the Sack of Rome in May 1527, Rosso completed another masterpiece in San Sepolcro itself, a Deposition that reflects his horror at the violence of the Sack (which led to his imprisonment and prevented this panel’s leaving Rome to reach its intended destination). Rosso reestablished himself in 1530 at the court of Francois I at Fontainebleau, performing extensive, primarily secular, work. He died there ten years later at the age of 46, under disputed circumstances.

William R. Cross writes a weekly column on art and the Gospel for his fellow parishioners at Christ Church, Hamilton, Massachusetts, USA.