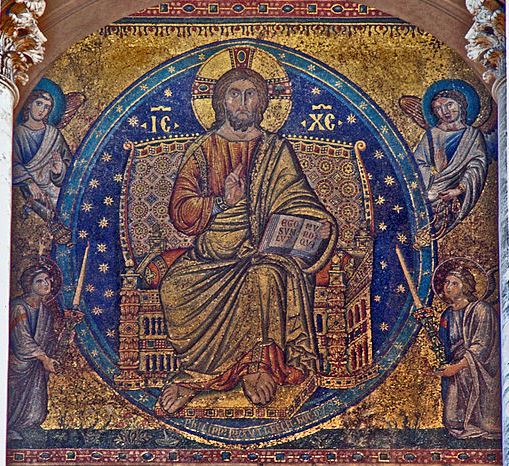 The Light of the World

In the arch above the portal of Santa Maria Maggiore, the great basilica church in Rome, there must have been an artwork or symbolic representation of some sort shortly after it was built, early in the fifth century. We cannot be certain now what it was, but had the structure been used as a Roman court (it so closely resembles one that it has sometimes been thought [wrongly] to be a converted imperial edifice), the symbol in that location would likely have been the sol invictus, the unconquered sun, an emblem of the Roman emperors. Christian basilica churches are very similar in lay-out to the Roman basilicas (see below), so that they can be viewed as an architectural juxtaposition of the old order of Roman justice and the New Law of grace and mercy in Christ.

Santa Maria Maggiore, begun within a year of the Council of Ephesus (431) and finished eight years later, was redecorated in the 13th century. In the inner portal arch, just where in Roman antiquity there would have been the sol invictus, a new mosaic reflecting prominent Christological themes was added by Filipo Rusuti, sometime between 1288-1297. This Byzantine influenced image echoes an earlier interior mosaic in the cella representing Christ as a young emperor surrounded by four angel attendants. But here he is enthroned, as would have been a Roman judge, and announcing with his open gospel text a central divine claim which directly challenged the Roman imperium even when first uttered: “I am the light of the world.”

The angels most probably represent the “four daughters of God,” Justice and Truth with their drawn swords, and above them Grace and Peace (cf. Ps. 84:10; Vulgate 84:11). The text of Scripture Christ holds open is from John 8:12 which in Latin reads “Ego sum lux mundi, qui….” The reader has to supply the rest from memory, as space in a mosaic is limited. Of course, recollection causes more than five words to be remembered: “qui sequitur me, non ambulat in tenebris, sed habebit lumen vitae” – “I am the light of the world; whoever follows me will not walk in darkness, but will have the light of life” (ESV). For Roman Christians the old darkness was fresh enough in cultural memory and its contrast with the light of Christ striking. In the season of Advent the promise of that light out of darkness, unconquered, is still welcome, and still an invitation to worship.

David Lyle Jeffrey is Distinguished Professor of Literature and the Humanities at Baylor University. He is the author of a forthcoming book, The Beauty of Holiness: Art and the Bible in Christian Culture (Eerdmans, 2017).