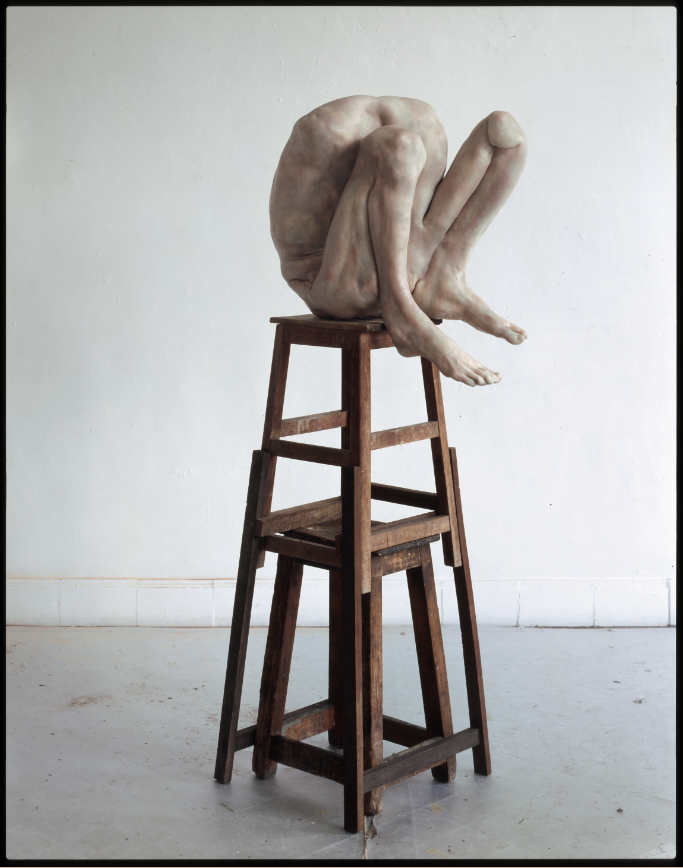 We see a human figure, more than life-size, naked, knees folded against the body, sitting on a stool. There is no head. It looks like the arms are embracing the knees, but no: there are no arms. The cold light falling from above on this sculpture by Berlinde De Bruyckere makes the skin appear lifelike, vulnerable and pale. The feet are movingly narrow. Is this a human being?

It is my first reaction to quickly walk past this sculpture, for who can bear to look at so much suffering and solitude? But after a few steps I walk back. I have to stay, this creature cannot be left alone in this dark space. Hunched into himself as he is, perhaps he can hear me when I say something. Hear? When there is no head, there are no ears either.

Berlinde De Bruyckere is gaining more and more notoriety with her sculptures. She arouses horror and protest, but also evokes compassion and a longing to protect the work against the great dark cold. It is just like real life: when you are confronted with suffering, you want stay away. But you also want to get closer – because that’s how you are made.

Berlinde De Bruyckere places one of her series in the tradition of the Man of Sorrows: Christ just after his death on the cross, overladen with wounds, with a crown of thorns on his head. It is the most hopeless moment of the entire Passion cycle, not a moment described in the Bible, yet one that has played a large role in 16th-century personal devotion and art. These paintings and sculptures were not primarily made to convey a message. They were intended most of all to help the viewer experience Christ’s suffering, with a big word called ‘imitation’.

While the 16th-century sculpture of the Man of Sorrows remains at a distance for us 21st-century viewers, the work of Berlinde De Bruyckere does not. When you take time to ponder what it is in her work that deters and attracts, you also gain a different view of Christ’s suffering. Is that suffering really so dear as the world of believers has made it to be? Is com-passion really possible? Is it not already quite an accomplishment when you do not walk away but stop and stay near, and remain there?

Berlinde De Bruyckere (Ghent, b. 1964) is a Belgian artist who creates sculptures that reveal the human body and human life in all its frailty. Her installations of equine and human bodies evoke feelings of terror, but also of love and consolation. The work is both emotionally immersive and provocative, regularly creating controversy. De Brucykere’s bitter-sweet images unite pain and suffering with a strong aesthetic appeal. Her Cripplewood presentation attracted great public attention at the 55th Venice Biennale. The SMAK Museum in Ghent and the Gemeentemuseum in The Hague held a major retrospective of her work in 2015. Watch a video about her work here.

Anne Marijke Spijkerboer is Professor of Theology at the University of Groningen, she teaches Theology and Art to pastors and is minister of the Reformed Church of Rijswijk, the Netherlands.