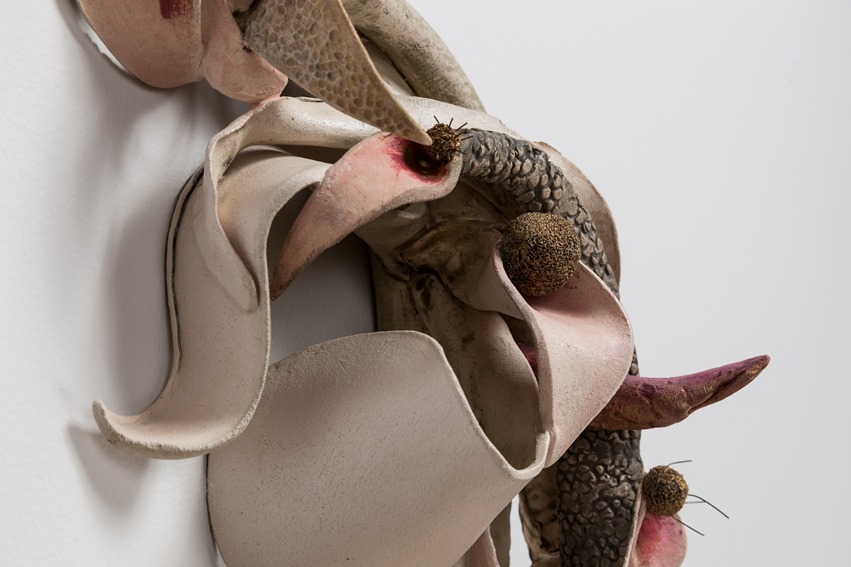 In the Garden of Delight and Decay

“When the woman saw that the fruit of the tree was good for food and pleasing to the eye,
and also desirable for gaining wisdom, she took some and ate it.
She also gave some to her husband, who was with her, and he ate it.” Genesis 3:6 (NIV)

There is so much brokenness and beauty in the world. We are prone to forget that these two realities happen to be next-door neighbors. We walk towards beauty only to find that we have landed in brokenness.

Allison Luce explores the in-between spaces. She is a ceramicist whose work exhibits the inherent tension that exists within all human beings, between strength and fragility, birth and decay. Out of a larger body of work entitled Serpent Tree, Luce is creating something new in a collection she has entitled Primoris Ortus. These forms hearken back to the Garden where the first trespass occurred. The artist writes, “Referencing nature as well as the body, these sculptures are about birth, growth and temptation.”

From the outset I am drawn to the beauty of Luce’s work only to discover that something else is at play. There is an edge, a spike, a death. I can almost see the radiance falter before me, the life force being sucked out of the vine. 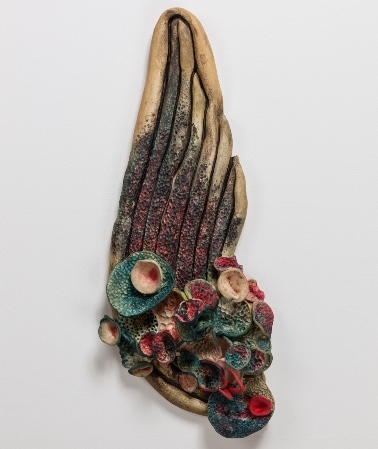 In Trespass one is drawn to surface tones of aqua and red that are not-quite-bursting forth from the petals at the bottom of the piece. Is this a kind of pan-flute whose pipes play the song of a decaying melody? There is a melancholy that develops as the tune appears moldy, either from disuse or neglect. 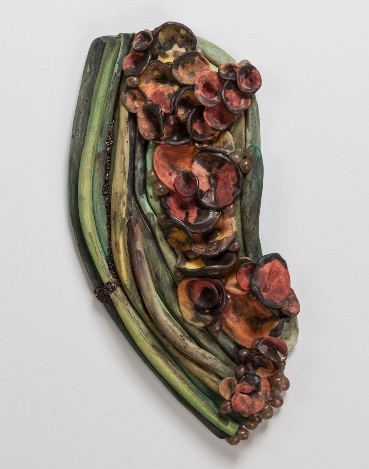 Misconception is a kind of plant-like assemblage where pedals and pods have seemingly been dragged through the mud. There is a kind of gaudy beauty that oozes forth from this piece. One is left to wonder if restoration is possible or even desired.

As the art looks back at us, we are reminded of our own frailty. How comfortable are we with the idea of our own mortality? Within these forms lives the possibility of memento mori: “For dust you are and to dust you shall return.” (Genesis 3:19, NIV)

“Father in heaven, through your Spirit you have given us breath and life. Through your Son we look forward to that day when he will “make all things new.” There is within us, lying dormant, a memory of a Garden. But when we open our eyes we see a wasteland of woundedness. We recognize that we have had a part to play in the unfolding of our current situation and we confess that we cannot relieve the pressure on our own. While the world wilts around us, awaken us to a new path of flourishing. Teach us the notes to the symphony of resurrection. Be glorified. In Jesus’ name, Amen.”

Allison Luce graduated with dual BFA degrees in Painting and Art History from Ohio University and her MFA from Hunter College, City University of New York. She currently lives and works in Charlotte, North Carolina where she is a studio artist and an adjunct art instructor. She has shown her work in solo and group exhibitions internationally and her work is included in private collections. www.allisonluce.com

Brian Moss is the Associate Pastor of Congregational Life at Orcas Island Community Church in Eastsound, WA. Brian received a Bachelor of Music from Belmont University in Nashville, TN and a Master of Divinity from Regent College in Vancouver, British Columbia. As a songwriter, he is currently working on new songs inspired by the psalms.