Every afternoon at three o’clock, in the suburbs of Orlando, Florida, USA, Jesus Christ is crucified and rises from the dead. Tickets to the Holy Land Experience theme park cost $13.99 and include all rides, Scriptorium bible exhibit and biblical karaoke (Thursday nights only). At the daily resurrection play you might see Jesus rise from the dead on the back of a Harley Davidson motorbike. The website states, ‘Experience Hope. Experience Joy. Experience Jesus… Three tickets for the price of two.’

In Geraint Evans’ painting A Sculpture Garden (2005) we see two artists contemplating a recent sculptural installation in what appears to be the communal garden in a late-modern housing estate. Their sculpture is reminiscent of the plastic architecture of Holy Land Experience theme park. It also brings to mind the Salvation Mountain folk art installation near Slab City in the Colorado Desert. Evans renders the image with the same intense detail of a hobbyist painter and a flat cartoon graphic that might be found in an instruction manual. The fake mountain seems lovingly, if not obsessively, made and sincerely artificial. It is an authentic fake.

The term authentic fake is often associated with that of hyperreality and first coined by postmodern philosophers Jean Baudrillard and Umberto Eco in the early 1980s to describe certain questions about the nature of reality (the real versus the imaginary) and authenticity (the original versus the fake). Since the quiet death of the ‘postmodern’ within the contemporary discourse the term has been conspicuously absent over the past ten years, yet its legacy lives on in the work of London painters such as Geraint Evans and Dan Hays.

Hays and Evans both play with the idea of the great American sublime. For the nineteenth-century Hudson River School the wilderness of America’s Yosemite Valley represented an untamed vision of wonder that reflected the awesome character of the creator God. As Leigh Markopoulos writes, ‘a notion of wilderness far removed from the fearsome and wholly heathen pagan domain of the lost Garden of Eden, as first perceived by their predecessors’. [1] 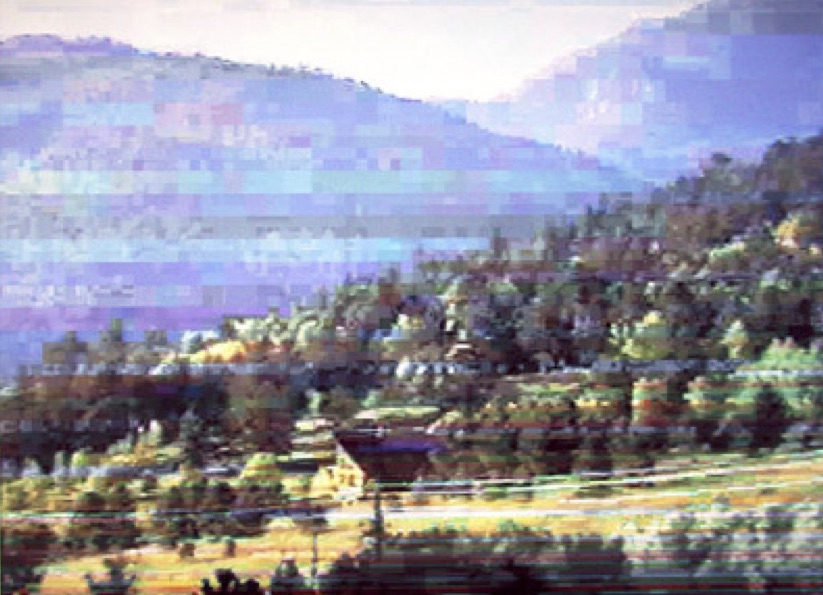 To Dan Hays, however, the wilderness is now tamed, a domesticated landscape to be consumed or commodified rather than feared. Today we often witness the wilderness through media such as holiday snaps on Facebook, Instagram or Twitter. Similarly through movies such as Dances with Wolves, Wild or Into the Wild, safely viewed in the comfort of a cinema auditorium. Hays paints accurate reproductions of pixelated photographs first taken by others and posted on the internet or sourced from CCTV footage. His selection of photographs refer to romantic tropes such as the fading sunset or bank of evergreens. Hays chooses photographs taken by people who share the same name as him. In this way he not only raises questions about the way we see and consume the wilderness but also authorship and authenticity in a digital age.

In turn Evans offers another vision of a domestic wilderness. In his 2010 painting In the Mall a mountaineer looks set to climb a craggy outcrop, only the rock face is artificial and located in a shopping centre. An escalator to the top makes the mountaineers preparations ridiculous.

Evans vision of a tamed wilderness is not far from the reality offered on holiday today at a national park or ‘wilderness’ experience such as Snowdonia National Park in Wales where you can take a tourist train to the top of the highest peak in the UK. The café at the summit serves up a nice café latte to accompany your view. Where once our predecessors climbed to the top of a mountain and sang, ‘How Great Thou Art’, today we drive to a national park and ask, ‘Where is the coffee shop?

Evans and Hays offer a cynical perspective on the sublime wilderness (and notions of an awesome God that go with it). Yet, to me, their exploration of hyperrreality, and the questions of authenticity and reality that go with it, suggest more than a hint of prophetic insight towards the way we see and consume God’s world.

Geraint Evans (b. 1968) is a Welsh artist who is interested in the ways in which we perceive, encounter and experience the natural world. His work depicts manicured or fabricated gardens and parks, shopping malls and suburban green belts, national parks and theme parks. The fictional protagonists that populate these landscapes include heavy metal campers, nudist hikers and ornamental hermits. Geraint is interested in our complex perception of the wilderness and in the effect of ever evolving technologies and mass tourism on our relationship with the natural world. Geraint Evans grew up in Swansea and studied at Manchester Polytechnic and the Royal Academy Schools, graduating in 1993. His solo exhibitions include Newport Museum and Art Gallery, Wales, 2012; Wilkinson Gallery, London, 2000 and 2004; Chapter, Cardiff, Wales, 2001; Glynn Vivian, Swansea, Wales, 2002 and CASA, Salamanca, Spain, 2003. He is currently the Acting Pathway Leader for BA Fine Art Painting at Wimbledon College of Arts, University of the Arts London. http://www.geraintevans.net

Dan Hays (b. 1966) is a London, England based artist and an associate lecturer at Central Saint Martins, University of the Arts London. He completed a PhD at Kingston University in 2012, which included the exhibition Screen as Landscape at the Stanley Picker Gallery. Recent group exhibitions include Film in Space at Camden Arts Centre (2012), Witnessing the Wilderness at Wimbledon Space, Wimbledon Art College (2013), and A Machine Aesthetic at Gallery North, Newcastle (2013). The relationship between the intangible, encoded and instantaneous realm of the digital and the tactile, flawed and time-consuming medium of painting is the focus of his work for the time being. http://danhays.org

Alastair Gordon is a London based artist and co-founder of Morphe Arts, a mentoring network for Arts graduates. He also tutors at Leith School of Art in Edinburgh. http://www.alastairjohngordon.com

[1] Cited from accompanying text to Witnessing the Wilderness, an exhibition co-curated by Evans at Wimbledon Space, London 2013.