In Lent 2016, I organized Stations of the Cross through London, with stops including the National Gallery, Westminster Cathedral, St Paul’s Cathedral, and Temple Church.

As luck would have it, several people in Washington DC learned about the project and recognized immediately that it could be a great fit in their hometown. We began investigating sites and thinking about what would make for a distinctive DC version of the Stations. While politics formed an undercurrent in the London version, in the DC incarnation politics quickly surged to the front of our minds. With the election of a president fiercely intolerant of refugees and immigrants, and with a highly dubious approach to issues ranging from the treatment of transgender individuals to Jews and African Americans, we realized that the Stations needed to speak to the acute anxiety facing so many minorities in today’s America and beyond.

We had our mission. Next we needed a route. This presented a puzzle – at times exciting, at others exhausting. The problem was how to make a trail through the capital that was within walking distance, followed a logical and compelling route, and touched important works and sites coinciding with the correct station. We began to draw up a list of possible sites that once numbered in the dozens and started to try out each one. 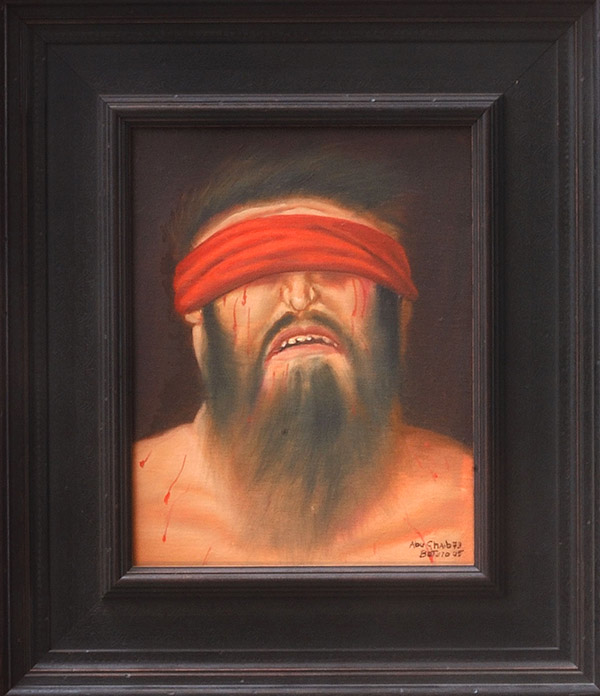 The more sites we examined the more we realized how important it was not just to incorporate new works of art responding to the Stations, but to find ways of activating new meanings in existing works, especially DC’s abundant monuments. To tell the Stations of the Cross as an American story did not just involve placing that story onto the city’s landscape, but finding ways in which that story was already being told in existing locations. We began to catch glimpses of the suffering Christ all around DC – from paintings in the National Gallery to public statues. We felt our job was to connect these images with works by the amazing contemporary artists we were working with: Ndume Olatushani, Michael Takeo Magruder, and Leni Dothan.

We hope this exhibition proves a new way to discover and experience the nation’s capital. But above all, this exhibition wagers on the fact that those who dwell in and visit the city are not just seeking aesthetic diversion from works of art, they want art that speaks to them of matters of ultimate significance. They want art which provokes their passions, and helps pronounce their greatest fears and hopes. And what could be a more fitting subject than the Passion itself?

More information: 1 March – 16 April, An Exhibition across Washington, D.C. in 14 Iconic Destinations. A Pilgrimage for Art Lovers, A Protest for the Disenfranchised. "Why have you forsaken me?" Jesus’ words upon the cross speak acutely to the anguish and alienation felt by many today in America, from immigrants and refugees to religious, sexual, and ethnic minorities. This unique exhibition—held in 14 locations across Washington, D.C. — will use works of art to tell the story of Jesus’ Passion in a new way, acutely relevant to the plight of America’s disenfranchised. The Stations weave through religious as well as secular spaces, from the Mall to downtown D.C., and up to the National Cathedral. Instead of easy answers, the Stations aim to provoke the passions: artistically, spiritually, and politically. The art on display includes monuments, Old Master paintings, and newly commissioned art installations. Featured artists include Ndume Olatushani – once falsely imprisoned on death row – and Michael Takeo Magruder, one of the world’s leading artists in digital media, who has created a haunting Shroud of Turin filled with the faces of Syrian refugees. Visitors can take this tour by downloading the smartphone app, ‘Alight: Art & Sacred.’ The app will serve as your tour guide with podcasts from leading clergy, artists, and scholars, along with maps leading to each of the stations. These items, as well as details on the artists, spaces, contributors, and associated events are available on our website. http://Stations of the Cross — Henry Luce III Center for the Arts & Religion (luceartsandreligion.org)

Dr. Aaron Rosen is Professor of Religious Thought at Rocky Mountain College and Visiting Professor at King’s College London.  He taught previously at KCL, Yale, Oxford, and Columbia, and received his PhD from Cambridge.  He has curated various exhibitions, and written widely for scholarly and popular publications.  He is the author of Imagining Jewish Art and Art and Religion in the 21st Century, named one of the best books of 2015 by The Times.  He is the editor of Religion and Art in the Heart of Modern Manhattan and co-editor of Visualising a Sacred City: London, Art and Religion.