Art is no fringe attached to the garment, and no amusement that is added to life, but a most serious power in our present existence.
Abraham Kuyper

Nativity by Night by Geertgen tot St. Jans and Holy, Holy, Holy in the version of Sufjan Stevens.

Holy, holy, holy
Lord God almighty
Early in the morning our song shall rise to thee
There is a sign at the side of thee
Merciful and mighty
God in three persons, blessed Trinity

Holy, holy, holy
Lord God almighty
All Thy works shall praise Thy name in earth and sky and sea
There is a sign at the side of thee
There is none beside Thee
God in three persons, blessed Trinity

The example of the Christ Child


This painting from 1490, made by the painter and lay brother Geertgen tot Sint Jans (c. 1465 -1495) who lived in Haarlem, the Netherlands, is full of the still attentiveness of the Devotio Moderna (a religious movement in the Late Middle Ages that encouraged a close personal relationship with God). You can look at it for a long time, as at an icon, and focus your attention on one element of the work and then on another. It can help you to gain a deeper understanding of the secret of the birth and incarnation of Christ, so that it may speak to you in new ways and lead you to adoration. This was the intended purpose of the painting. 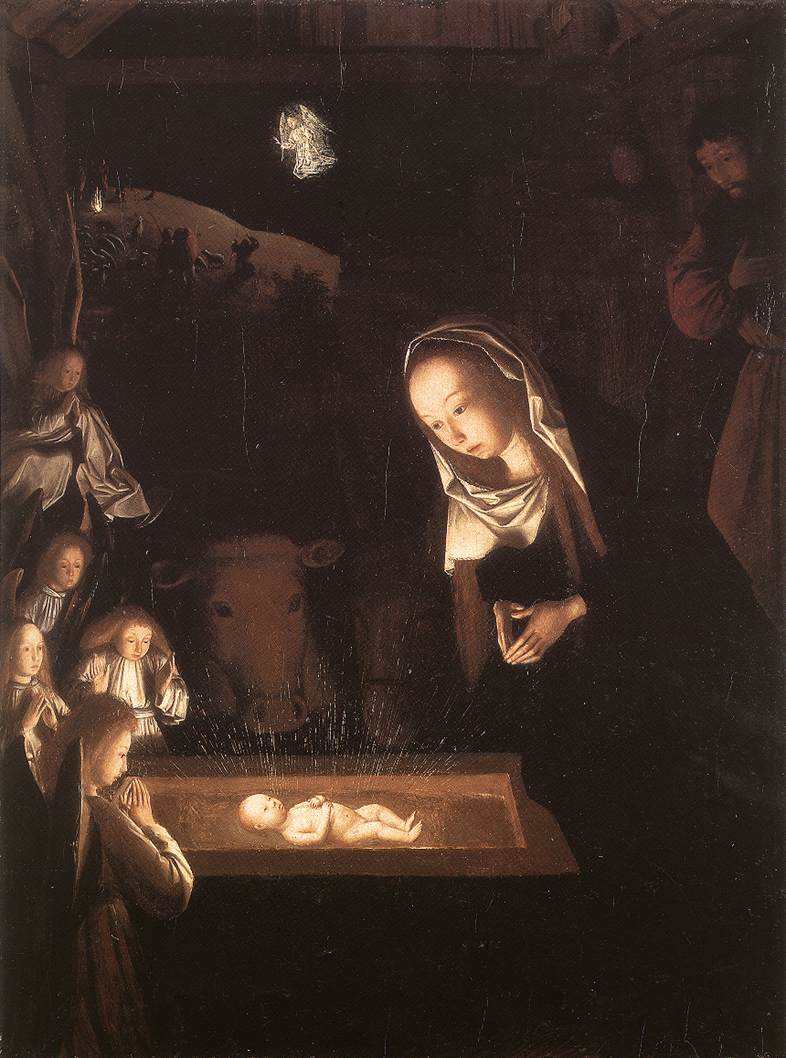 The first thing that strikes us is the darkness of this canvas. The night is truly black. Jesus enters a world that is dark. This makes that he is the Light of world stand out all the more. As a bright source of light he is lying in a crib. The light that bathes this artwork in a soft glow is coming from Jesus in the manger and from the angel who appears to the shepherds in the distance. It is in fact supernatural light.

Jesus and Mary take a central place in this painting. Filled with awe Mary worships her child. Also Joseph, to the right of her, turns toward the little one, full of devotion, with his hand upon his heart. Five angels are positioned to the left of the manger. The ox and the donkey with their enormous heads right above the small child have been given a prominent position. They owe their presence to Isaiah 1:3, where it is stated that in contrast to humankind ‘the ox knows its owner, and the donkey its master’s crib.’

I combined Nativity by Night in a multimedia presentation with the hymn ‘Holy, Holy, Holy’ in the rendition of Sufjan Stevens, which appeared on one of his Christmas CD’s. In the chorus of this hymn God is worshiped with the words: ‘Blessed Trinity.’ It struck me that by letting this song be about the Christ Child, as Sufjan Stevens did, this child is honoured as part of the Trinity: the small becomes inconceivably big. Only later it hit me that Mary and three of the angels form a triangle with their hands, i.e. the reference to Jesus as member of the Trinity is also an important element in the painting!

Yes, Jesus is really minuscule here - too small in fact. The sizes do not agree with each other. Mary, Joseph, the ox and the donkey are portrayed in a bigger scale than the child and the angels. A difference in sizes does occur more often in the 15th century, but usually it is the holy that was depicted larger than the ‘ordinary’ world. Here it is Jesus and the angels that are rendered in a smaller scale. Why would Geertgen have done this?

Probably because Jesus represents the small and the weak who will conquer evil that feeds itself on prestige, wealth, power and violence. Just like Jesus on the cross is an image and example of how we as human beings are meant to be, so this child in the manger is as well. We must become like a child and know our dependence on a Father who will fill our open hands. We must become like the angels in the painting who look with childlike astonishment at that naked miracle that happens to be part of the Holy Trinity. We must become like Jesus who executes God’s all encompassing plan of redemption by becoming a human being who in his love, time and again, adopts an attitude of service and vulnerability. It was the aim of the ascetic Devotio Moderna to become ‘naked and small’ as a pillar of a devout and Christ devoted life. For whoever becomes like a child will enter the kingdom of God. The Christ Child shows us the way.

Sufjan Stevens mixes autobiography, religious fantasy, and regional history to create folk songs of grand proportions. A preoccupation with epic concepts has motivated two state records (Michigan & Illinois), an electronic album for the animals of the Chinese zodiac (Enjoy Your Rabbit), a five-disc Christmas box set (Songs for Christmas), and, more recently, a programmatic tone poem with film accompaniment for the Brooklyn-Queens Expressway, a large-scale ensemble piece commissioned by BAM in 2007.Born in Detroit and raised in the upper reaches of Northern Michigan, Sufjan attended Hope College, in Holland, Michigan, and the masters program for writers at the New School for Social Research. Sufjan currently lives in Brooklyn, NY. http://asthmatickitty.com/sufjan-stevens

Marleen Hengelaar-Rookmaaker is editor-in-chief of ArtWay.